I know Ann Arbor like the back of my hand, a cliché I use with gusto, as that is how Michiganders point out where they live in the mitten state. I grew up here, went to college here, met my husband here and visited here frequently during the 20 years we lived overseas. Seven years ago, we moved back here (to A2, as locals call it), drawn to its small city charm and big university culture. Our only worry was that our palates might protest having lived in Brussels, Cairo, London and Paris. Though we were longtime fans of our still-thriving student standbys — Zingerman’s Deli for a Reuben, Dominick’s for a sangria, and a double patty at Blimpy Burger — we knew little about post-1980s Ann Arbor restaurants.

Happily, we discovered a food frontier that did not disappoint. In our nearly three-decade absence, the dining scene had grown from collegiate to culinary. Living in a state brimming with agriculture and a town teeming with academics, the food movement felt both authentic and educated, as evidenced by an early “sustainably sourced” brunch we enjoyed at the Grange Kitchen and Bar, where we learned from an earnest waiter and Ph.D. candidate that even the spicy bloody mix in the “Michigan Mary” was produced locally, and lovingly, in Detroit.

Despite this, until the past few years we continued to harbor some lingering nostalgia for a few of our favorite restaurants abroad, though the opening of Spencer, a restaurant that serves fantastic cheeses, temporarily eased our lactose lust. Then, as if by magic, a whole new crop of Ann Arbor restaurants sprouted, each filling a different gastronomic gap in our lives. 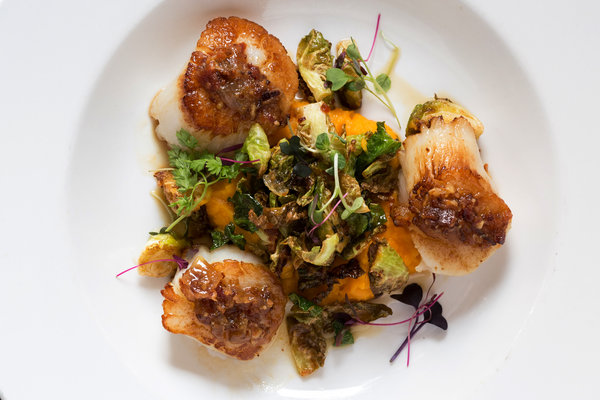 We had been missing London’s globe-trotting, fusion-food restaurant scene, when Taste Kitchen opened in September 2014, an elegant one-room restaurant just streets from campus. Featuring the creations of the chef Danny Van from Vietnam, the space is modern and fresh with Asian accents: a stunning wall of blue-gray slate, polished wooden floors, orange lanterns bobbing over a bar and woven mats on linen-topped tables.

Mr. Van’s dishes transported us to Vietnam, France and Britain, mixing the best flavors from each. Regular menu items include diver scallops ($30), bouillabaisse ($26) and shaking beef ($25). Though your taste buds travel, Mr. Van’s ingredients hail from nearby, whether you choose the Lake Erie perch ($28), served with wilted greens, tomatoes, capers and a lemon butter sauce, or the tuna poke with crispy won tons, shallots, sesame seeds and avocado ($15). The provenance of the extensive wine and tea list, however, circles a dizzying number of countries.

Taste Kitchen, 521 East Liberty Street, tastekitchena2.com. Dinner for two is about $100, without wine. 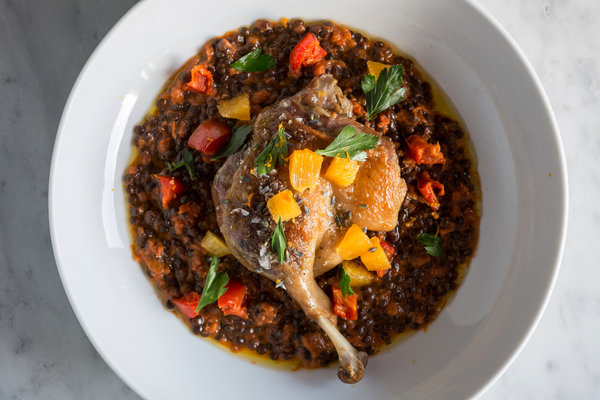 Another craving that was missed in our Ann Arbor diet was the fare from a bustling bistro, a European mainstay. Then in August 2016, Mikette Bistro and Bar opened. Immediately I took my 85-year-old father, who had owned a French restaurant in Ann Arbor in the ’60s that flopped within a year but lived on in the pages of “Tender at the Bone.” Ruth Reichl, the former editor of Gourmet, wrote hilariously about waitressing at my dad’s restaurant, where the chef stole food and the patrons protested the prices. (Chateaubriand for two cost $16, a framed menu in our home shows.)

From the moment we walked into the lively Mikette, it was obvious that the owner, Adam Baru, had achieved what my father had not a half-century earlier. Mr. Baru is a seasoned restaurateur with two other successes: Mani Osteria, an Italian favorite of Mario Batali, who has a home in Michigan; and Isalita, inspired by the street food found in Mr. Baru’s wife’s native Mexico. A master at matching food and décor, he outdid himself with Mikette, transforming a nondescript one-story building into a movie set from “An American in Paris,” with red banquettes, colorful French posters and a year-round terrace warmed in the winter by standing heaters just like those on the Champs-Élysées.

But it was the menu that resurrected my fondest food memories. In Paris, my go-to bistro dish was always a Lyonnaise salad — lettuce, pancetta, crispy potatoes, topped with a lightly poached egg. And there it was on the menu, for $11, along with duck confit with lentils ($17), always my father’s first choice. It was while living in Brussels that I discovered gougères (Parmesan pastry puffs) and the way people there eat moules frites, gripping a French fry with an empty mussel shell and dipping it in the fragrant broth. Both items were on the menu ($8 and $15), as were plump plates of oysters ($36 for 12, from the West Coast) that I watched a group of late-night diners slurp down with chilled glasses of chardonnay, while my father and I ended our meal with crème brûlée and chocolate mousse (both $6). 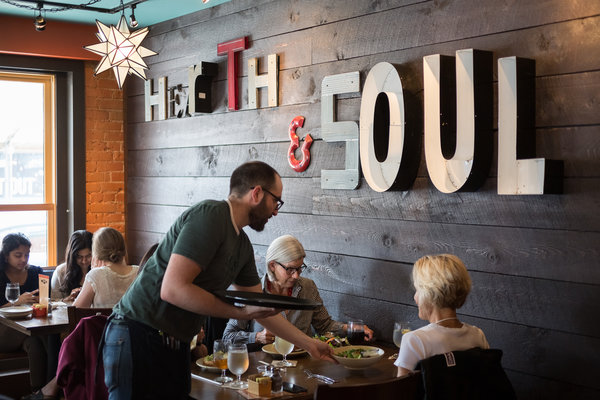 On Sundays, particularly at lunchtime, we still longed for our favorite British pubs, where one could always find a hearty roast and jovial crowd. That lasted until this past December, when the Avalon Café and Kitchen opened. We already knew the brand. Avalon International Breads, owned by Ann Perrault and Jackie Victor, is a beloved, 100-percent-organic bakery that opened in Detroit in 1997, in what was then one of the poorest, most-crime-ridden areas in the city (now it is a hot spot of revitalization). With more than 1,000 customers streaming through their Detroit doors daily, they decided to expand beyond the city by opening a cafe and full restaurant in Ann Arbor. 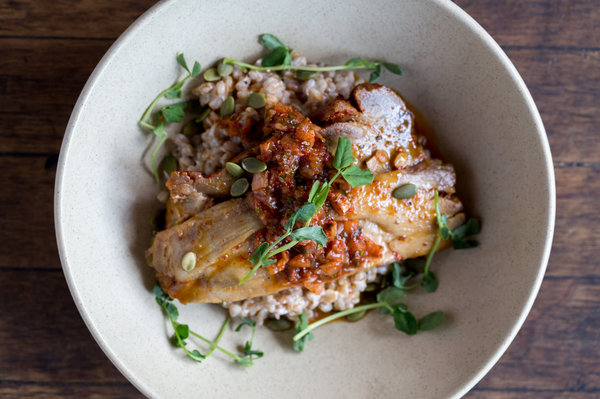 Though I was initially lured into Avalon’s cozy cafe — with its coffee bar serving treats to be savored — I gravitated quickly toward the adjacent restaurant. The red brick walls, rows of wooden tables and long leather bench that stretched the entire length of the far side were quintessential traits of a British tavern (though Avalon’s tables were less rickety). What’s more, the menu was filled with comfort food from across the pond: a slow-roasted Berkshire pork shoulder ($22), a braised oxtail French dip ($14) and grilled porridge bread with a bacon jam that was far better than Marmite ($8). Yet the menu also featured lighter items, a pan-roasted trout with root vegetables ($25), which made me feel less guilty about finishing the meal with a dark chocolate bread pudding ($8). Beer on tap featured Michigan breweries, and the boisterous crowd enjoying ale and hard cider mimicked the perfect pub.

Avalon Café and Kitchen, 120 East Liberty Street, avalonbreads.net/avalon-cafe-and-kitchen-ann-arbor. Dinner for two, without drinks, is about $70. 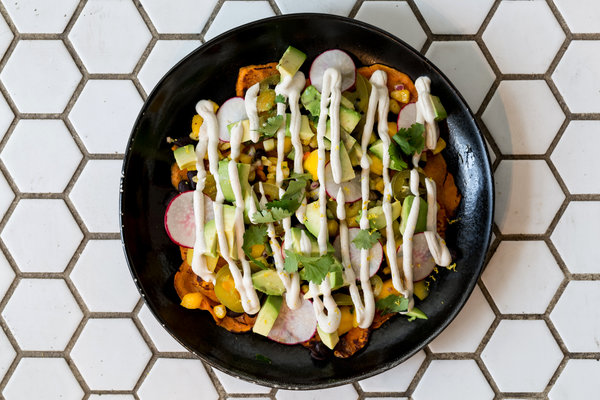 Earlier this year, a friend asked me to meet her for lunch at a new health-driven cafe called Fred’s. A fan of the popular Ann Arbor vegan restaurant, the Lunch Room, which now has two outlets in Ann Arbor, I was wary that another clean-eating restaurant would succeed. But walking into the bright, airy space casually decorated with wooden crates, wildflowers in glass jars and church pews softened with colorful blankets, it felt exotic and strangely familiar. It reminded me of the funky cafes we used to frequent in Egypt, as did the menu filled with fruity smoothies and grainy dishes. We ordered a kale dip with lime, cumin and cashew cream, served with toasted whole-wheat lavash ($7), a chickpea salad ($5) and “sweet potato nachos” ($7); the thinly sliced rounds topped with corn, mango, black beans and a sprinkling of salsa, cilantro and lime looked too pretty to devour — until we did. Everything at Fred’s tasted like fresh air, warm winds and sunshine amid our freezing Midwest winter.

As I later learned, the young owner and chef, Fred Lelcaj, intended to do just that: serve the healthy food he craved, like his power bowl boasting three kinds of fruit, hemp hearts, almond butter and gluten-free granola ($11), acai ($8) and rice bowls filled with a range of items, like banana and coconut, and rice bowls ($8) topped with shaved bulgogi and grilled salmon ($10).

While Fred’s big sister, Sava Lelcaj, is the owner of two restaurants in town (Aventura and Sava) both popular with the adult university community, Fred’s — located under a student-apartment building — is still mostly filled with backpacks. That demographic is sure to change, just as the food scene here will evolve, keeping a transient population of students, alumni and visiting parents sufficiently sated as they return year after year — or in our case, for good.

Fred’s, 403 East Washington Street, fredsannarbor.com. Lunch for two is about $30.

Most Popular on NYTimes.com